For civil and structural engineering firm Costin Roe Consulting, winning the 2016 ACSE NSW structural engineering excellence award in the category ‘Unusual Projects’ for work on the Veolia MBT facility at Woodlawn, near Goulburn, brings wider attention to the firm’s role in completing one of the world’s most remarkable eco-projects. 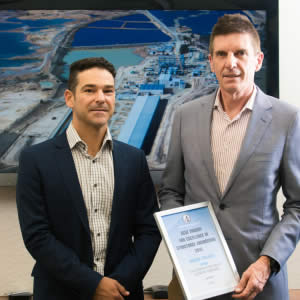 A ‘good news’ story for the people of NSW and generations to come, the Veolia MBT facility is transforming much of Sydney’s garbage into the on-site production of green energy, aquaculture, agriculture, and much more as intrinsic value is extracted from the municipal refuse which has caused a mounting problem for the Sydney region.

Few Sydneysiders would realise that each day more than 1,800 tonnes of Sydney’s household and commercial waste is trucked to Banksmeadow where it is compacted and containerised for the 250km rail leg to Tarago – preserving air quality and avoiding the increased costs and risks associated with excessive heavy vehicle transport on our highways. Yet, it was at this point of transition for the waste on its journey to Woodlawn where some of the most significant engineering challenges associated with the project would be encountered by Costin Roe Consulting.

At the Banksmeadow transfer facility, garbage trucks from participating municipalities arrive fully loaded at 40 tonnes, exposing pavement areas to not just the movement of extreme load weights but also the flow of organic acids produced by putrescible waste. Where conventional concrete pavement and even jointless ‘combi’ flooring would have rapidly deteriorated, structural engineers from Costin Roe Consulting collaborated with concrete technicians to formulate an innovative approach to pavement construction which would maximise its durability in the aggressive Banksmeadow environment.

Using a waste by-product of silicon-related manufacturing, silica fume, as an additive to make the concrete more impervious to penetration by liquids and less prone to becoming odiferous, challenges associated with the workability of concrete containing silica fume were overcome to successfully complete construction of the pavement areas required for operational serviceability at Banksmeadow.

Achievement of structural precision despite challenges and constraints 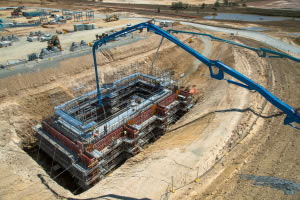 Other structural engineering challenges associated with construction at the Veolia Banksmeadow site included the presence of a high water-table, the need to preserve an electrical easement which provides one of the main feeds to Sydney’s Eastern Suburbs, and access restrictions imposed by rail sidings on two of the boundaries.

At the Veolia Woodlawn MBT site, structural engineering challenges for Costin Roe Consulting included the design and construction methodology of the reception pit at 13 metres deep, 27 metres long and 12.5 metres wide. Examples of achievement in structural precision included elements such as 24m lengths of pipe installed within a 2mm tolerance, structural beams installed at 25m above ground level within 2mm +- tolerance, and each welded joint being x-rayed and certified.

Renowned for exceptional capabilities in building information modelling (BIM) technology, Costin Roe Consulting successfully resolved numerous technical challenges inherent to the unique design and construction requirements and constraints at the Veolia sites to coordinate and document all works in BIM.

End result is a win for NSW and all project stakeholders 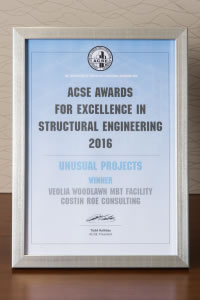 ACSE NSW award for ‘Excellence in Structural Engineering’ in the category ‘Unusual Projects’ 2016 won by Costin Roe Consulting for the Veolia Woodlawn MBT facility, announced in Sydney on Thursday 23 March 2017

Today, the Veolia Woodlawn MBT facility produces and exports sufficient electricity to power more than 6,000 homes each year, provides more than 2.5 tonnes of sustainably-grown barramundi to the Canberra market, farms livestock for meat and wool, makes compost, and rehabilitates land which had been contaminated by open-cut mining – all from the mechanical and bio-technical processing of Sydney’s waste. 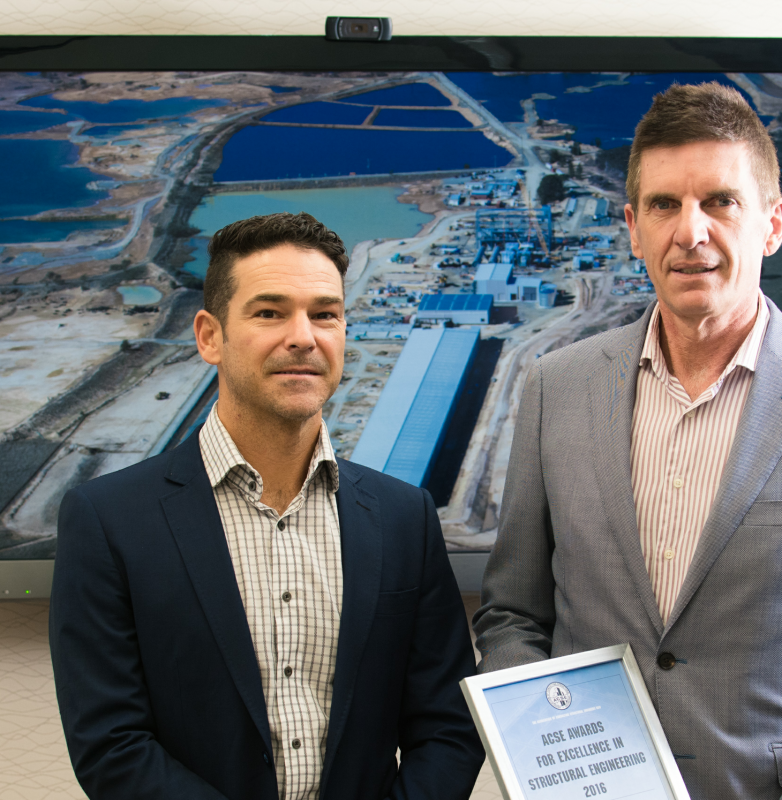 ACSE NSW award for ‘Excellence in Structural Engineering’ in the category ‘Unusual Projects’ 2016 won by Costin Roe Consulting for the Veolia Woodlawn MBT facility, announced in Sydney on Thursday 23 March 2017 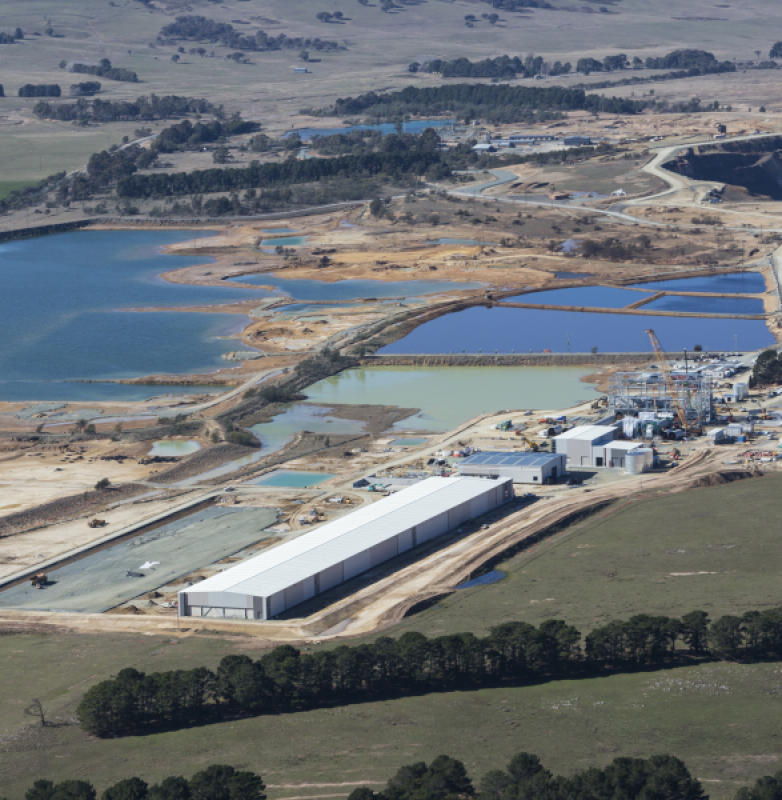 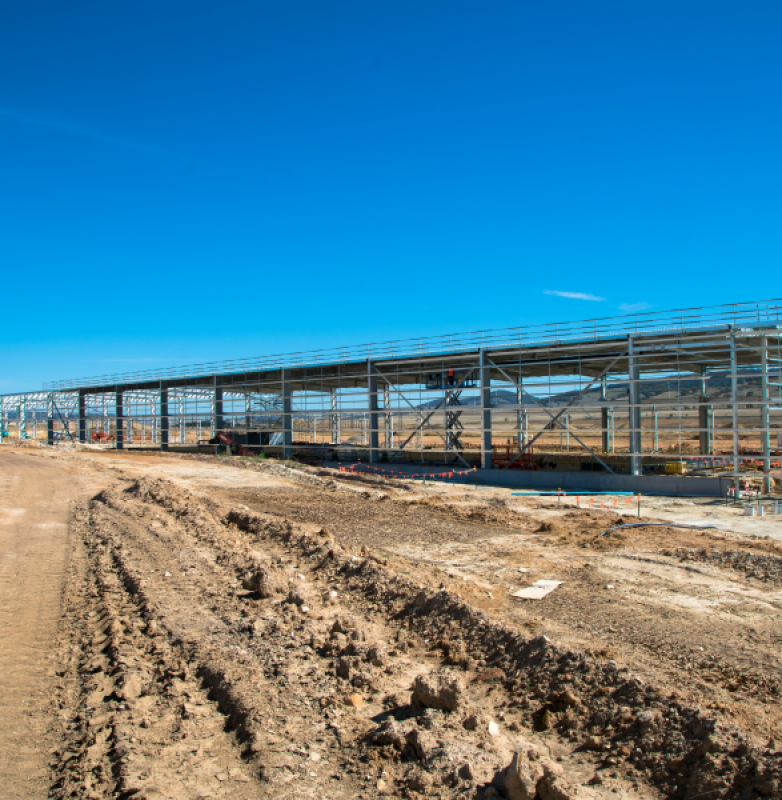 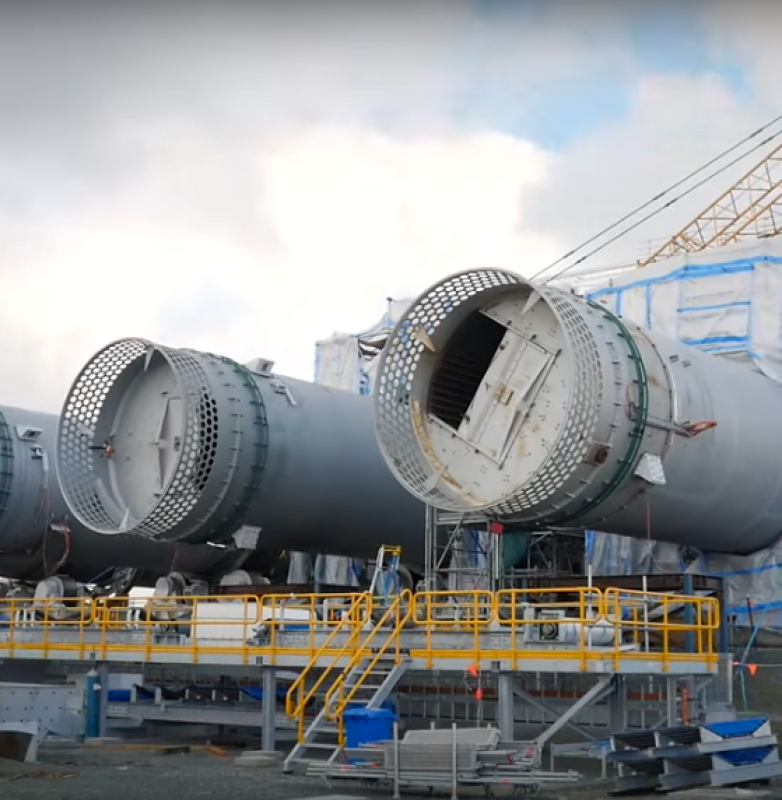 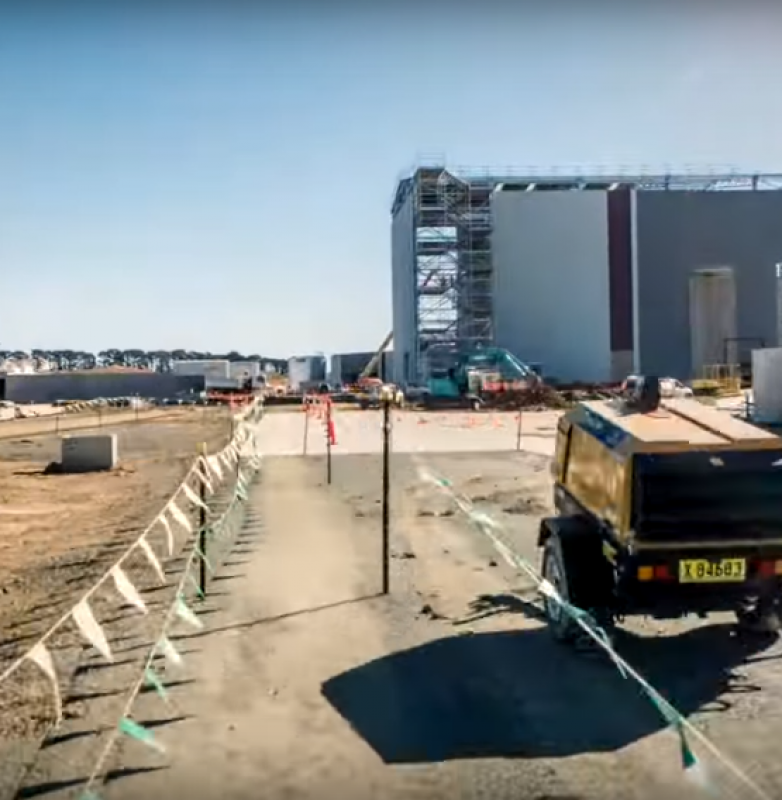 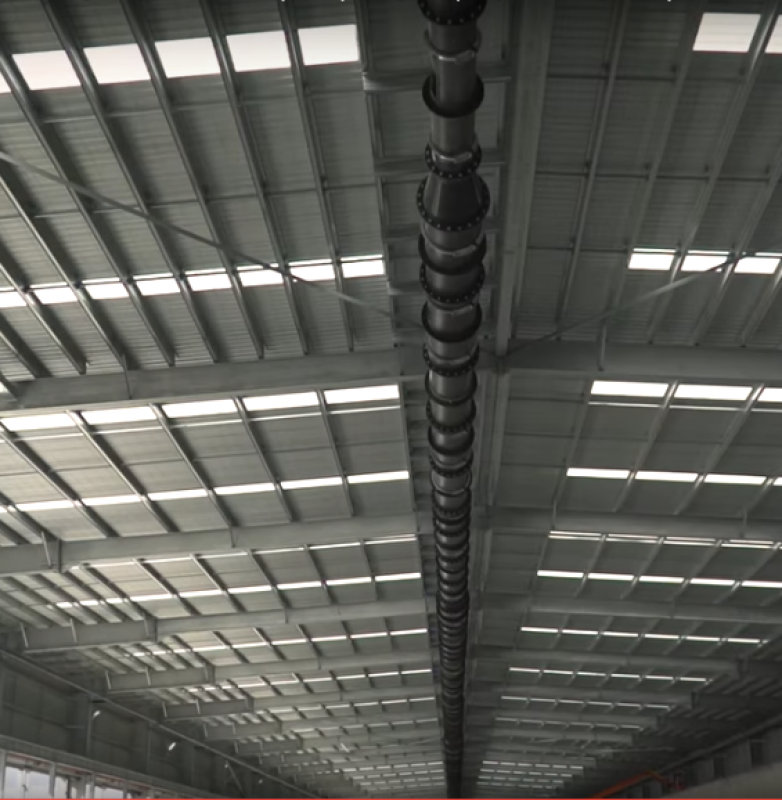 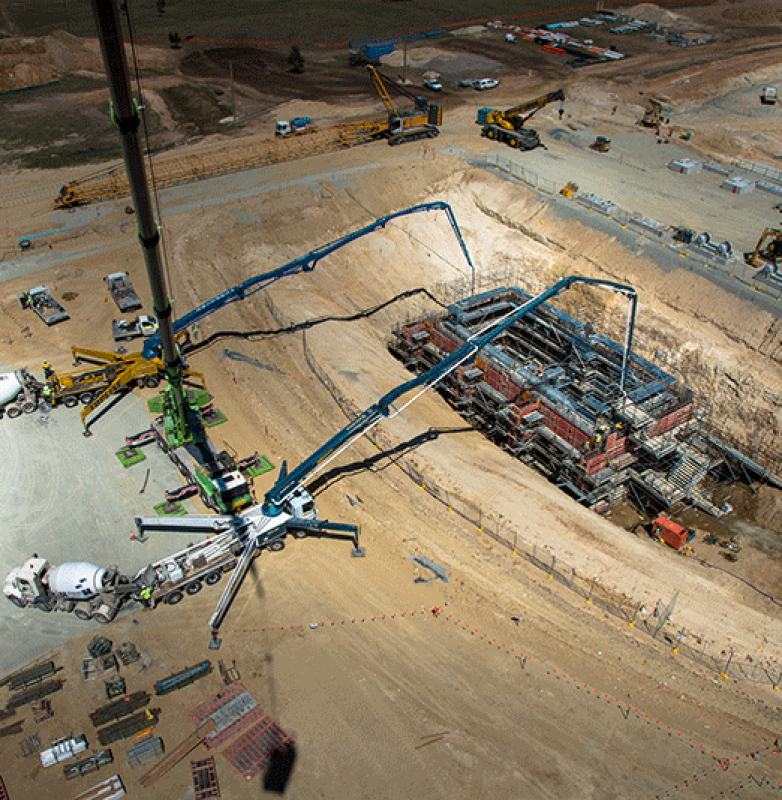 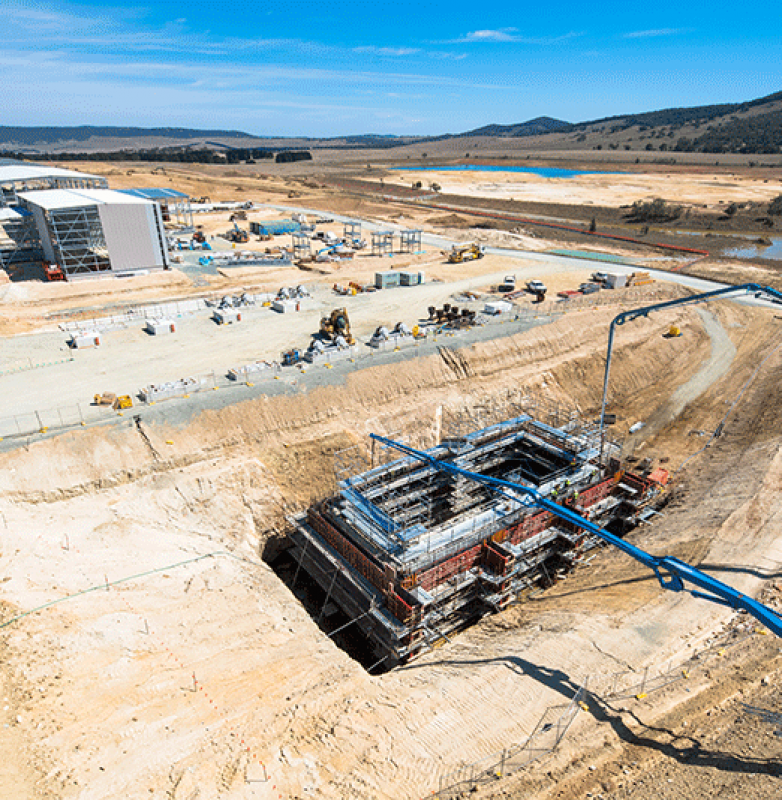 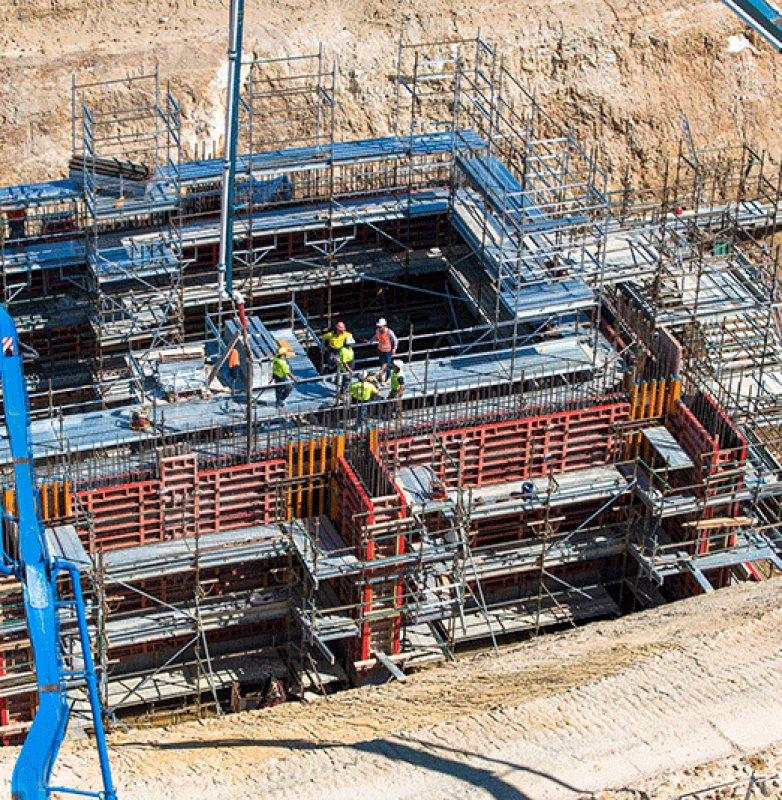